We shoot various firearms at Croydon club Range & the ones we can't shoot at Croydon we take to the NRA UK National Shooting Centre at Bisley Camp in Brookwood, Surrey. Please take a look through the different categories.

Sporting rifles are .22 cal. rifles that have taken the place of pistols since modern cartridge pistols were banned in 1997. A current favourite is the Ruger 10/22 self-loading rifle. Rifles in .22LR calibre are the only SLR's that can be owned in the UK.

Made by companies like Anschütz & Feinwerkbau. The modern target rifle has an aluminium stock & is single shot. A special jacket is worn (and for competitions trousers, underwear & shoes)  with a sling attached to the upper arm that supports the weight of the rifle so that the shooter becomes a part of the rifle rather than just holding it. This makes for very accurate shooting &, of course, higher scores.

These have grown in popularity since the 1997 handgun ban and are more accurately referred to as pistol-calibre rifles. A well-known example is the Winchester rifle that was designed to use the same ammunition as the hand guns of the American west making a saving on weight & having to carry two different calibres of ammunition.

A modern rifle is completely different to an army or service rifle. It may be in the same calibre -ie .223" or .308"/ 7.62mm as a military rifle but it's a single shot rifle that has to be manually reloaded after each round as it has no magazine. This rifle is from HPS Rifles of Gloucestershire, England.

The only handguns that can be shot in the UK are old designs of pistols like duelling pistols & cap-and-ball revolvers such as the Ruger Old Army model below.
They are known as cap-and-ball as unlike a cartridge pistol that has the bullet, powder & priming cap all in one, the black powder is loaded separately & then the round lead ball is compressed on top of it. A percussion cap is placed on the nipple at the rear of the cylinder and this is carried out for all six chambers in the cylinder. Then the gun is ready to fire. 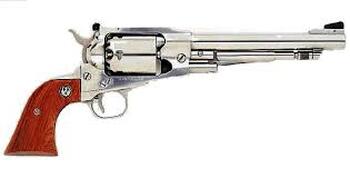 Air rifle and pistol shooting is very disciplined because as the pellet travels so much slower than a bullet the handling and squeezing of the trigger is crucial. The rifle above is from the Anschütz website & the power is provided by compressed air -the tube visible under the barrel.
Air pistols work under a similar compressed air principle and in this picture from Steyr you can see the air pressure gauge. This is the LP-50 that takes a single or five shot magazine